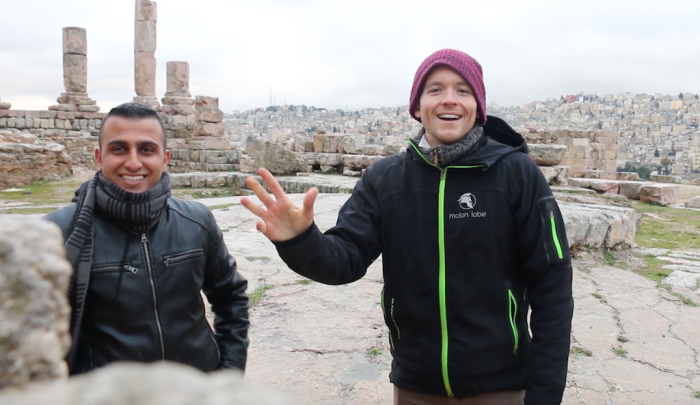 On my fourth day in Jordan, Sohaib brought me to the Amman Citadel, known in Arabic as what sounds like Jebal al-qaulla (Note: when I write these blog posts, I’ll use my own homegrown spelling style to transliterate the Arabic words into what I feel like they sound like in English… don’t count on these being any kind of standard), which literally translates to Mountain of the Citadel. The Citadel is, as you might guess, a high up castle in Amman. It features the ruins of many old civilizations, including the Nabateans, the Romans, the Byzantines, and then the early Muslims. It’s a must-see for anyone visiting Amman. On this day, Sohaib and I could only spend a few minutes before the weather took a harsh turn, but we managed to film an episode for you!

1:02 – CITADEL. What a cool word in English. Not a word I hear enough. Until now, I always thought it just meant the top of something, like it were synonymous with “summit”. I blame the 1988 young adult novel Banner in the Sky on this. In that book the kid wanted to climb the Citadel, which apparently was the name of a mountain. I thought “citadel” meant the top of any mountain.

1:07 – And so you, fair Lernen to Talk Show viewers, hear your first instance of adjective gender endings in Arabic. That’s right, just like in German and Spanish and pretty much every other non-English language, words have gender in Arabic. Feminine Arabic words have a tendency to end with the letter ة, which tends to make a sound like “ah” (even though technically the letter is more like a “T”, but that’s another story). Anyway, you’re supposed to add that letter to the end of any adjective you’re using to describe a feminine noun, which usually also end in ة. Here I said “al qalla jemeel”, and I should have said “al qalla jemeela”, because “al qalla” is a feminine word: القلعة. Note: This word will pop up again in Episode 14…

1:12 – A classic case of me just saying one of the few words I actually know in order to keep the conversation going.

2:02 – In English it’s called the Amman Citadel, but Jordanian’s don’t need to bother specifying it as being of Amman, which is why you don’t hear the word “Amman” when it’s referenced in Arabic.

2:22 – It’s funny to hear now how I used to pronounce the word لا, meaning “no” (and sounding like “la”). I used to say it more as “law”, which is wrong. It’s actually pronounced more like “lah”. It’ll be interesting to see in future episodes where I finally get this right.

2:40 – I’m trying to talk about my age here as it’s talked about in English and German… but I soon learn that in Arabic you need to have the appropriate verb to talk about how old you are! It’s a word that sounds like “umree”… Sort of like in Spanish. You won’t be understood in Spanish if you say literally “I am twenty-nine”. You need to say “I have twenty-nine years.” The thing you say in Arabic translates literally to something like “The age of me is twenty-nine.”

3:09 – And if you’re talking about the age of something else, something feminine in this case, the word you use sounds like “umruha”.

3:23 – I got too worked up about this Arabic only rule early on. What’s wrong with a little English now and then?